Exciting news! The River Bend Film Festival is coming to Goshen this year.

The festival has been held in South Bend for the last 14 years. But this year, the festival board members felt it might be time to let another community be part of the fun.

River Bend is a 3-day celebration of film. Throughout the weekend, festival goers can watch films created around the world. There will be internationally known filmmakers, actors, screenwriters, and directors, many of whom many have roots in the local area. These local film connoisseurs have gone on to reach success in Hollywood, New York, and beyond. Though not all of them will make it to the festival, our area has produced a number of highly acclaimed actors, filmmakers, and directors.

Jordon Hodges, an actor, writer, and director from Goshen, known for his roles in Sand Castles and The Things We’ve Seen. (Jordon is also on the planning committee for the festival!)

The following people will not make an appearance at the festival (at least, not this year!):

Stephen Susco, a graduate of Notre Dame University, who wrote and produced The Grudge and Texas Chainsaw Massacre.

Lisa Varga, an actor from South Bend, who is known for her roles in Homeland and Walker, Texas Ranger. 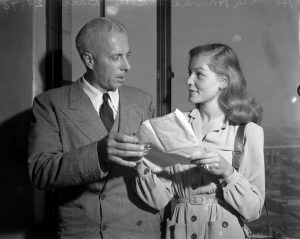 Howard Hawks and Lauren Bacall in 1943.

Stay tuned to our blog for updates about special guests, events, and information from now until the festival begins on March 31 in vibrant downtown Goshen.